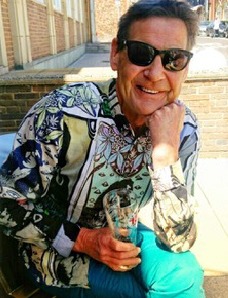 Although we share the same surname we weren’t related. Mike had however worked for my family almost 30 years ago, both at Widnes and Swinhoe. I met Mike a few years back, and always addressed each other as Mr Lythgoe. We became good friends.

www.koffin.co.uk as featured on ITV, BBC, The Guardian, Liverpool Echo.

This was a project I’d discussed with Mike months before his illness and he was that interested and fond of the project, he wanted to go out and sell the Koffins and we’d even talked about his. Koffins are a Bio-Ethical, Eco-Friendly and far cheaper yet customisable product meant to reduce costs for families at a time of loss. Parts were even developed with LPJMU’s 3D printer.

Sadly Mike developed Cancer, and I visited Mike many times in hospital before his death. I felt duty bound after all Mike and I were friends and had discussed his design ideas prior to his illness.

So I spoke to Mikes friend Karen and offered to customise the Coffin which had already. Mikes coffin was to be green with a Rastafarian kind of design. There was going to be African drummers and everyone had been told to wear sunglasses and bright colours.

The coffin was painted in Bio Ethical, Eco Friendly water based paint with added vinyl text to fulfil requirements set by the industry, which oddly enough due to the Koffin project I knew well. Generally I custom paint cars, bikes and scooters at Liquid Customs Bolton.

Friends and family members all chipped in with words and sayings he used. and our mutual friend Paul Grimshaw stepped up and offered to transport the coffin to my house and to use his epic pickup as the hearse.

A very special man, a fantastic funeral as odd as that sounds, and a true celebration of his life!